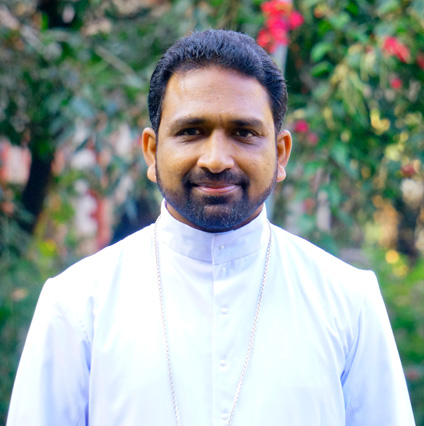 Mar John Nellikunnel belonging to the Eparchy of Idukki was born on 22 March 1973 at Kadaplamattam in the Eparchy of Palai as the son of Mr.Varkey and Mrs Mary Nellikunnel. Having completed his school education in St. Mary’s High School, Mariapuram, he joined the Minor Seminary of the Eparchy of Kothamangalam in 1988 for his priestly formation. He had his philosophical and theological formation in St. Thomas Apostolic Seminary, Vadavathoor. He was ordained priest on 30 December 1998. After his ordination he exercised his parish ministry as assistant vicar in St. Sebastian's Church Nedumkandam, Infant Jesus Church Kombayar and in St. Mary's Church Manjappetty. From June 2000 to January 2001 he served the office of the assistant vicar in St. George's Church Vazhakkulam. From 2001 January to June he was the assistant vicar in St. Sebastian's Church Thodupuzha. Then he took Licentiate in Philosophy from Pontifical Gregorian University, Rome, (2001-2003) and Doctorate in Philosophy from Pontifical University of St. Thomas Aquinas, Rome (2003-2006). Then he was appointed vicar in St. Thomas Church Mavady (February 2007- May 2007). From February 2007 to May 2010 he served the office of Eparchial Chancellor and the Secretary to the Bishop. Besides this, he acted also as the Director of Catechetical Department and Bible Apostolate. In 2010 he was appointed resident staff at St. Joseph’s Pontifical Seminary, Mangalapuzha. Besides this, he served the office of the House Procurator of the Seminary from 2011-2015. In 2015 he was appointed as the Dean of Philosophy at Mangalapuzha. He was appointed Bishop of Idukki while he was serving the Eparchy as the Secretary of the Corporate Education Agency, following the resignation of the present Bishop of Idukki, Mar Mathew Anikuzhikattil. He was ordained bishop and took charge of the diocese on 5th April 2018.